The Museu Tèxtil promotes the preservation of textile heritage. It provides specialist expertise in the world of textiles and brings historical and contemporary textile products to a wide public.

The Museu Tèxtil is a centre for research and preservation. It offers a range of specialist services for the conservation, curation and documentation of textile items and for the training of students and professionals in the field.

The Museu Tèxtil brings textile heritage to a wide audience, through its exhibitions, documentary resources, and research, and through the workshops and activities it organizes for adults and children alike. 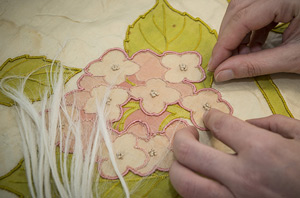 The members of the Museu Tèxtil consortium are:

The Vallès region has a long history as a textile producing centre. In 1946 the wool industrialist Josep Biosca donated his private collection of historic fabrics to the city of Terrassa. Some years later, the Biosca Textile Provincial Museum incorporated another collection which the Provincial Council of Barcelona had acquired from the Barcelona industrialist Ricard Viñas. These collections would eventually grow into Terrassa’s oldest museum, the Centre de Documentació i Museu Tèxtil (Textile Museum and Documentation Centre), which is also the first specialist centre of its kind in Spain.

In the 1960s the two local government bodies, the City and the Provincial Councils, joined forces to create a larger museum, which opened its doors in 1970 in the building that houses the Museu Tèxtil today. Gradually, new collections of ancient fabrics, passementerie and costumes were added, along with a large number of donations

With the support of the International Council of Museums, a project for the renovation of the museum was proposed and approved in 1988. In the following year the plan was launched to establish the museum as a dynamic reflection of its industrial heritage, under its current name: the Centre de Documentació i Museu Tèxtil of Terrassa. In 1995 the management body of the Centre was constituted as a local public consortium comprising the Provincial Council of Barcelona and the City Council of Terrassa.

Free visit for all audiences. Places limited to the capacity of the rooms.

Look at services and activities or contact by phone: 937 315 202
Hall with capacity for 84 people, equiped with PA system, PC+projector and Internet connexion.

The Museu Tèxtil is keen to work in networks, share projects, save resources and join forces to achieve its objectives. It is already working together on specific projects with a range of institutions that share its work ethos and interests. Among its partners are:

Universitat Autònoma de Barcelona
School of Philosophy and Arts. Departments of History and Art.
Practicals for undergraduates studying History and History of Art.

Study, research and dissemination of precolumbian and american heritage. 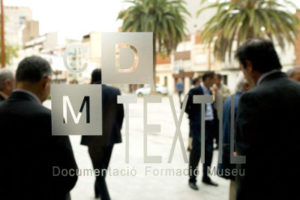 The three members of the Circuit maintain a coordinated acquisitions policy for institutions, firms or private individuals wishing to donate or sell textile heritage items. The three museums also collaborate in exhibitions and produce the digital magazine Datatèxtil, which is published every six months. 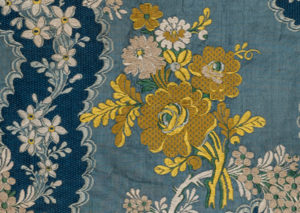 Researchers, designers and all those interested in textile heritage in general can consult a large part of the museums’ stocks online. The museums in the Circuit also offer technical assistance, restoration of fabrics, garments and other textile objects, specialist training in the form of courses, workshops and other personalized formats, and support for research.

The Consortium of the Documentation Center and Textile Museum of Terrassa aware of the importance of the protection of the environment and the need to carry out an environmentally friendly activity with the environment has achieved the Environmental Quality Guarantee Distinctive in the Category of cultural facilities: libraries, museums and collections.

The Emblem of Guarantee of Evironmental Quality is a system of ecological labeling that recognizes products and services that fulfil certain environmental quality requirements beyond those established as compulsory under current regulations.